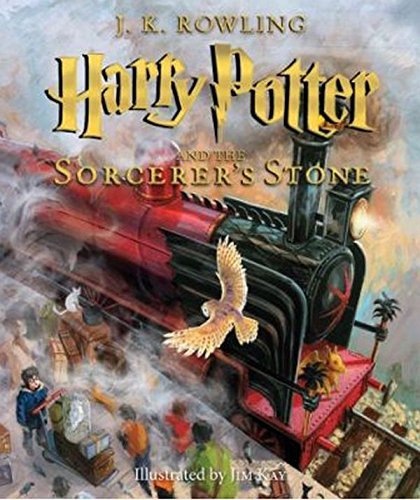 Harry Potter and the Sorcerer’s Stone – Illustrated Edition was written by J. K. Rowling. It’s a very good book. This is the first book in the Harry Potter series. They are being re-released in an illustrated version.

The main characters of this story are the famous boy wizard Harry Potter, and his friends Hermione and Ron. They live together in the House of Gryffindor, at Hogwarts School of Witchcraft and Wizardry. Albous Dumbledore is the principal of Hogwarts. Quirrell is the Dark Arts Defense teacher. Voldemort is an evil wizard that wants to get the Sorcerer’s Stone so he can live forever. Hagrid is the one who told Harry he’s a wizard. The story starts in London England.
After Harry finds out that he’s a wizard, he goes to the train station. He goes to platform nine and three quarters which is an invisible barrier between our world and the magic realm where Hogwarts School of Witchcraft and Wizardry exists.

This book is suspenseful and things are not always what they seem.
There’s also a lot of adventure. When 11-year-old Harry finds that he is a famous boy wizard, he goes to Hogwarts School of Witchcraft and Wizardry. During broom practice another student gets hurt. The teacher said not to fly while she takes the student to the nurse. While she’s away, another student steals a ball. Harry gets the ball and returns it. The teacher sees him flying, but she lets him join the quidditch team. Quidditch is a magic sport like baseball. Harry is surprised he got on the team instead of having punishment for flying without her there.

Next, Snape, the Potion teacher, tries to kill him at a quidditch match because Harry is in The House of Gryffindor. He survives with the help of Hermione who sets fire to Snape. Harry tries to get back on Snape for trying to kill him.

Then Harry finds out about the Sorcerer’s Stone. He wants to protect it, but to do this he must get the stone. Harry and his friends, Ron and Hermione, go to a corridor in Hogwarts that is blocked off from students. They go through a trapdoor and through some rooms that have protections for the stone. He gets the stone. The book has many beautiful Illustrations. My favorite illustration was Hagrid’s hut. I also think this is a good book because its full of suspense and adventure. If you like these things, you should read this and the other Harry Potter Books in the series.